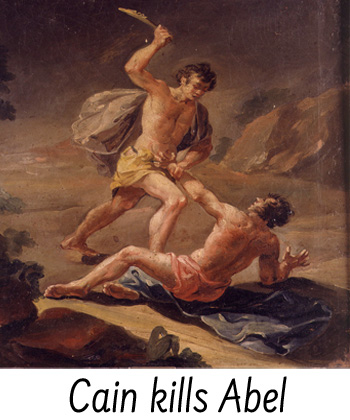 Many have had legitimate questions about why it was not counted as murder when Israel killed those God commanded them to kill…especially because it often included people we see as innocent such as women and children.

In a video series by Focus on the Family called, The Truth Project, Del Tackett accurately deals with this subject in that he clearly defines murder as “taking” a life. It is in fact a form of stealing – taking something which does not belong to you.

Ultimately, because God is the One Who told Israel to “kill them all” – the question before us is – can God kill or murder?

Understanding that in effect, murder is stealing, in that it is to take from someone else, the life which God gave them as though it were your right to do so… is it still murder if the Giver and Owner of that life authorizes you and in fact charges you with the responsibility to kill? I think the obvious answer is No!

This being true, it introduces yet another question – when God breathes life into a persons’ body – is He giving them life or giving them stewardship over His breath which animates them?

Clearly, the later MUST be the truth, because the breath of God… is God’s. His animating, life-producing breath belongs to Him, it’s ownership cannot be transferred…does not belong to us!

Nothing in this creation belongs to us in terms of ultimate ownership. The scriptures reveal that, “The earth is the Lords and the fullness thereof, the earth and those who dwell therein.” So we have not been given our lives, we have been offered a stewardship over what belongs to God.

“Friends, do not avenge yourselves; instead, leave room for His wrath. For it is written: Vengeance belongs to Me; I will repay, says the Lord.”

One might say, “But the sin was done to ME, so vengeance belongs to the one who was sinned against!”

No, it was God that was sinned against. The scriptures make it clear that vengeance does NOT belong to the one who suffers wrongfully, but to the One Who Owns all things.

David, after killing Uriah and taking Bathsheba by force to be his wife said in his repentance, “Against you and you only have I sinned and done this wickedness in your sight.” – Ps. 51:4.

God accepted David’s statement of repentance and did not correct him. Did David wrong Uriah and Bathsheba – ABSOLUTELY! But sin is to violate God’s law and act contrary to His nature, so in all reality, ALL SIN, regardless of who it effects is against God NOT man, though without question we all suffer collateral damage!

Consider the parable of the talents. The talents were always the possession of the King – the servants were only given a stewardship over them. This is why there is a judgment. The wicked servant saw the king as one who reaped where he had not bothered to sow – as if the talents which this servant buried did not in reality belong to the king. The end of this parable reveals that not only the talents belonged to the King – but so did the servant himself. The servant was cast out BECAUSE he had failed in his duties as a steward over the talents entrusted to him by the king.

So it is with every life. In the case of animals, God gave us the delegated authority to “kill and eat” following the flood. He has never given carte blanche authority to any human to take another human life. Any time God delegates that type of authority He does so within the framework of rules, laws and restrictions which are in keeping with His character and justice and which are clearly defined within the scriptures.

As to God commanding Israel to take the lives of everyone including women and children, it is difficult for us to understand how this is considered “ok”. However, that is because we are limited by a very worldly mindset. The life of a woman or child is not intrinsically more valuable and therefore worthy of protection than that of a full grown man.  Life…ALL life is of equal value, so to place one life as more deserving of protection than another is discriminatory and prejudice. Since all human life comes from God and bears His image and likeness – all human life holds the exact same value.

It is a curious thing indeed that in modern society, those who yell the loudest and tout themselves as the strongest advocates in the protection of women and children are the very ones who applaud the murder of the unborn. In reality they are not motivated by some sense of higher immorality but a base human desire to cater to selfishness and personal convenience.

God can take nothing from us that belongs to us – no ownership has been afforded anyone of us – only stewardship.

“Now then, you wise, take note; you men of knowledge, give ear to me. Let it be far from God to do evil, and from the Ruler of all to do wrong. For He gives to every man the reward of his work, and sees that he gets the fruit of his ways. Truly, God does not do evil, and the Ruler of all is not a false judge. Who put the earth into His care, or made Him responsible for the world? If He made His spirit come back to Him, taking His breath into Himself again, ALL FLESH would come to an end together, and man would go back to the dust. If you are wise, take note of this; give ear to the voice of my words.” Job 34:10-16

So the answer to our question, “Can God Murder?” is…God cannot take a life, because it already belongs to Him, and what He does with it is His choice. If man steps in and subverts justice by taking a life, he will be held accountable to the Owner of that life, namely God Himself!