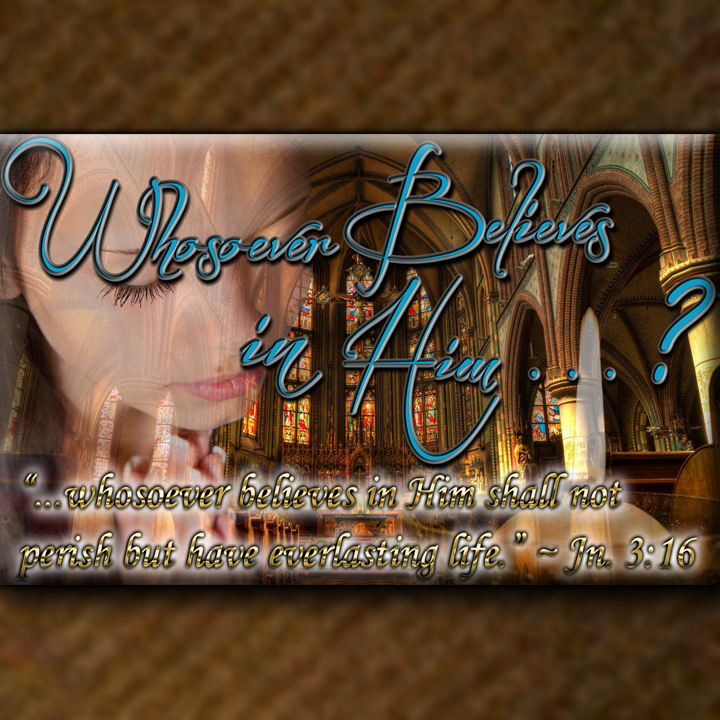 Believe…what does it mean to believe?

“(16) For God so loved the world that He gave His only begotten Son, that whoever believes in Him should not perish but have everlasting life. (17) For God did not send His Son into the world to condemn the world, but that the world through Him might be saved.”

That’s a big promise, but what does “believe” mean?

In today’s world there is a lot of subjective thinking, and while that can be good, it will not help you understand a promise someone else made.

What we are looking at in this verse is a promise God made through Jesus, and Jesus used a word for believe which is very different than the way many modern people use the word.

Everything in Jesus’ life pointed to relationship and intimacy with God and this word is no exception. This Greek word “believe” used by Jesus does not simply mean to be convinced of something’s truthfulness, but rather to rest into and rely upon with all of one’s heart.

This word is very similar to some Hebrew words used in the Old Testament which collectively illustrates it’s meaning perfectly.

“(5) Trust in the LORD with all your heart, And lean not on your own understanding;
(6) In all your ways acknowledge Him, And He shall direct your paths.”

These verses are written in a form of Hebrew poetry called parallelism. There are many forms of Parallel Poetry, but this one relies upon a method of repetition and advancement. In other words, each phrase is essentially saying the same thing, only using different words to complete the thought so as to provide a total picture in the end.

In these verses, three words are used for “believe” and they are:

Trusting with all of one’s heart is something which requires vulnerability. Unlike simply believing facts ABOUT Jesus, belief in Him leading to eternal life requires one to trust Him or more specifically, to trust on or upon Him. In fact, my church and I have adopted a new term for faith in order to side-step this deadly substitution and that is “relational trust“, and THAT is what Jesus was referring to in John 3:16.

This kind of trust is illustrated well by a life preserver tossed to someone drowning in the ocean. One can believe in the life preserver’s buoyancy and ability to save, but until they trust in the preserver – they will not be preserved. So it is with belief. Trust requires a surrender to one’s own ability and a vulnerability in order to rest into the ability of something or someone else.

There are many who claim to believe all the facts about Jesus – His virgin birth, His sinless life, His miracles, His death by crucifixion and His bodily resurrection – but these things can be believed as facts without trusting in or upon the One they speak about. Simple adherence to facts DOES NOT SAVE. God is interested in relationship – not academic adherence to truths.

The next word for faith or believe used in these verses is “lean“.

The word lean is actually used as a picture for belief. It means to place the weight of your entire self upon something else. To rely upon the strength and stability of something or someone else for your support.

Finally the last word used in these verses for faith or believe is “acknowledge“. This word actually serves to help us to understand the first two words.

This word acknowledge means to come to know God by way of experience…that is by acknowledging Him in everything you do. It is a knowledge gained by growing relational intimacy.

Now, let’s take what we have learned about the word “believe” and apply it to the words Jesus spoke.

It means, that if anyone believes on, trusts in and rests fully upon Jesus as their Savior by making Him their Lord and Master, they will not suffer the results of sin and death but will in fact enter into a state of being right with God, beginning now and lasting for an eternity.

Now, in closing, let me clarify what is meant by salvation or eternal life.

There are many subjective voices out there making claims about the meaning of salvation, and while they are usually not entirely wrong – they typically only refer to peripheral BENEFITS OF salvation, rather than salvation itself.

Salvation is the Greek word sozo and means, to effect a cure spirit, soul and body. This means that there is something intrinsically unhealthy in all human spirits, souls and bodies which need curing.

While there are many external manifestation of “unhealthiness” such as hatred, envy, theft, lying, murder and lust, these are results of unhealthiness not its causes.

Humanity was made for God and originally made in His image…after His likeness. What is unhealthy about man is his fall from that image and from intimacy with the One he was made to know.

It is no wonder therefore, that Jesus Himself defined eternal life in His prayer to the Father like this…

“…and THIS is eternal life that they might come to know You, the only true God by intimate and personal experience, and to know Me (Jesus) in the same way.” ~ John 17:3

Paul, Peter, James and John all tell us in their own way, that those who have come to know God intimately have had their spirit’s reborn and that this rebirth began a journey of progressively become more like God through the influence He has upon their souls as they come to know Him by experience.

THIS IS ETERNAL LIFE and this is what it means to truly believe in and upon Him.

John 3:16-17,
“(16) For God so loved the world that He gave His only begotten Son, that whoever believes in Him should not perish but have everlasting life. (17) For God did not send His Son into the world to condemn the world, but that the world through Him might be saved.”