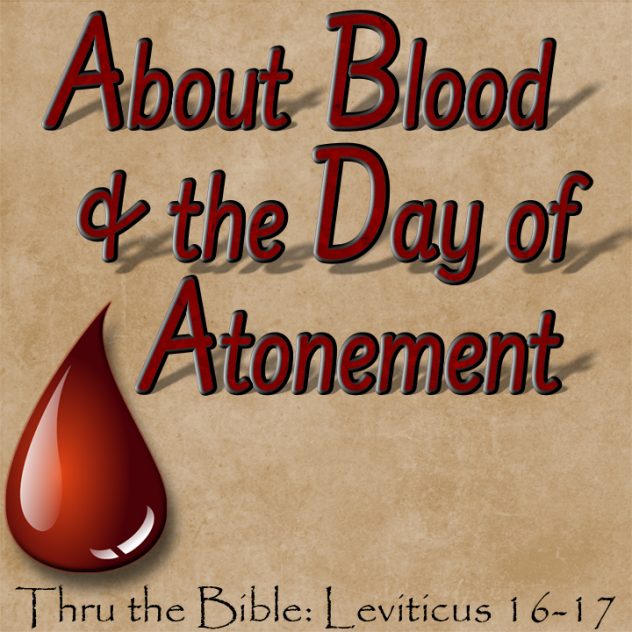 Message – About Blood and the Day of Atonement

Series: Thru the Bible

About Blood and the Day of Atonement

God teaches Aaron the Fear of the Lord

Moses was a unique personage in history since He carried two specific mantles which are not at all similar or even all that compatible.

So it is at the beginning of this chapter that God speaks to Aaron THROUGH His Prophet/Shepherd/Leader Moses and His words are about Honoring God and Respecting Him in and through his (Aaron’s) appointed office of High Priest.

NOTE: As we progress through these lessons, never let it escape your attention that Aaron, as High Priest, was a revelation of Jesus to future generations in His role as the final High Priest over the New Covenant made in His Own blood.

[This was done to make atonement for the Holy Place BECAUSE of the sins, transgressions and general uncleanness of Israel and for the tabernacle itself which dwells immediately among their uncleanness.]

This was a day of national repentance and sorrow for disloyalty to God in sins, transgressions and uncleanness.

NO WORK was to be done on this day. This was symbolic of man’s efforts at righteousness and in redeeming themselves as well as a practical consideration to make certain that every mind was focused on the importance of the day!

It was also a Sabbath of solemn rest which was recognized on the 10th day of the 7th month of the Jewish “religious” calendar which the Jews would have to struggle to enter into once the new way had been made by His blood. – Heb. 4:11

This is the what the writer of Hebrews was talking about in quoting the Old Testament when he said, “This is the covenant I will make with them in those days…I will write my law upon their hearts…they will all know me…I will be merciful to their unrighteousness, and their sins and the lawless deeds I will remember no more.”

You see, every sin an Israelite committed was to be atoned for upon committing it along with the appropriate Offering for Sin or Transgression, but that was NOT the last they heard of it!

ALL of their sins were remembered again once a year on the day of NATIONAL atonement.

So this passage in Hebrews 8:12 and the one in Hebrews 10:17, did not mean that any sin committed would not be recognized by God once a person is born again – as MANY false teachers are proclaiming today, – because that would contradict MOST of the New Testament in which John, Peter, James & Paul are CONSTANTLY reminding people of the seriousness of their sins and the need to confess and forsake them.

No, this passage is saying that once CONFESSED and FORSAKEN – they would be forgiven and He would not bring them up again as He did under the Old Covenant once a year.

God teaches Israel the Fear of the Lord

Eating what dies naturally was ok so long as it was a ceremonially clean animal and had not reached the point of decay, but if you did you were unclean and had to wash your clothes and bath and remain unclean until evening. If you did not – you would bear your guilt upon your own head (like the scapegoat).

There is more information in the audio/video of the actual message. I hope you listen, learn and enjoy!

I hope this teaching will challenge you and encourage you to place your trust in the Lord Jesus Christ as Savior and Lord.

You have a special place in God’s family & kingdom. If you do not know Him, please use our ‘Contact Us‘ page and reach out so we may have the privilege of introducing you to the Lord. Neither money nor attendance at our church will be mentioned.

If you have been spiritually fed by this ministry and wish to give, we truly appreciate that and you may do so here, but all outreaches of this ministry are FREE for you and anyone to enjoy at no cost.