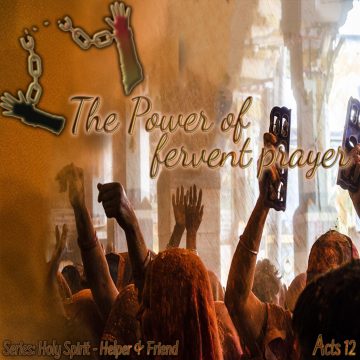 Message – The Power of fervent prayer

The Power of fervent prayer

Last week we saw examples of the early church working together in honor and respect for eachother and the voice of the Spirit of God.

This week we are going to see how passion in our lives as Christians can at times be even more important than faith in some areas. The early church LOVED. They loved the Lord, they loved each other and they had a kingdom centered love for the lost.

Because the church overcame the threats of the enemy and continued their growth, the enemy doubled down and moved upon Herod to have James, the brother of John killed and then proceeded to arrest Peter.

As we will see the church prayed earnestly…fervently for Peter, but we given all of the proofs offered by the account itself, they seemed to lack faith that their prayers would be answered…and yet, they were!

Let’s read this account from the early church with open hearts and minds, asking the Spirit to create understaning within us.

“(1) About that time King Herod laid hands on some from the church to harm them.
(2)  He had James, the brother of John, executed with a sword.

(3)  When he saw that this pleased the Jews, he proceeded to arrest Peter too. (This took place during the feast of Unleavened Bread.)

(4)  When he had seized him, he put him in prison, handing him over to four squads of soldiers to guard him.

Herod planned to bring him out for public trial after the Passover.

(5)  So Peter was kept in prison, but those in the church were earnestly praying to God for him.

(6)  On that very night before Herod was going to bring him out for trial, Peter was sleeping between two soldiers, bound with two chains, while guards in front of the door were keeping watch over the prison.

(7)  Suddenly an angel of the Lord appeared, and a light shone in the prison cell.

He struck Peter on the side and woke him up, saying, “Get up quickly!” And the chains fell off Peter’s wrists.

(8)  The angel said to him, “Fasten your belt and put on your sandals.”

Then the angel said to him, “Put on your cloak and follow me.”

(9)  Peter went out and followed him; he did not realize that what was happening through the angel was real, but thought he was seeing a vision.

(10)  After they had passed the first and second guards, they came to the iron gate leading into the city. It opened for them by itself, and they went outside and walked down one narrow street, when at once the angel left him.

(11)  When Peter came to himself, he said, “Now I know for certain that the Lord has sent His angel and rescued me from the hand of Herod and from everything the Jewish people were expecting to happen.”

(12)  When Peter realized this, he went to the house of Mary, the mother of John Mark, where many people had gathered together and were praying.

(13)  When he knocked at the door of the outer gate, a slave girl named Rhoda answered.  (14)  When she recognized Peter’s voice, she was so overjoyed she did not open the gate, but ran back in and told them that Peter was standing at the gate.

(15)  But they said to her, “You’ve lost your mind!” But she kept insisting that it was Peter, and they kept saying, “It is his angel!”

(16)  Now Peter continued knocking, and when they opened the door and saw him, they were greatly astonished.

(17)  He motioned to them with his hand to be quiet and then related how the Lord had brought him out of the prison.

He said, “Tell James and the brothers these things,” and then he left and went to another place.

(18)  At daybreak there was great consternation among the soldiers over what had become of Peter.

(19)  When Herod had searched for him and did not find him, he questioned the guards and commanded that they be led away to execution.

Then Herod went down from Judea to Caesarea and stayed there.

(20)  Now Herod was having an angry quarrel with the people of Tyre and Sidon. So they joined together and presented themselves before him. And after convincing Blastus, the king’s personal assistant, to help them, they asked for peace, because their country’s food supply was provided by the king’s country.

(23)  Immediately an angel of the Lord struck Herod down because he did not give the glory to God, and he was eaten by worms and died.”

It is easy with all the miracles which we see happening in the book of Acts to assume Herod was literally eaten alive by worms right on the spot in a matter of moments.

If read with a clear head, the passage does not claim that happened. The thing which happened immediately was that an angel struck him down – the result was that he was eaten with worms.

The Jewish historian Josephus’ account of this offers some illumination.

On the second day of a festival, Herod Agrippa appeared in the theater with a robe made of silver. When it sparkled in the sun, the people cried out flatteries and declared him to be a god.

The king, carried away by the flattery, saw an owl (an omen of death) sitting on a nearby rope, and immediately was struck with severe stomach pains.

“(24)  But the word of God kept on increasing and multiplying.

(25)  So Barnabas and Saul returned to Jerusalem when they had completed their mission, bringing along with them John Mark.”