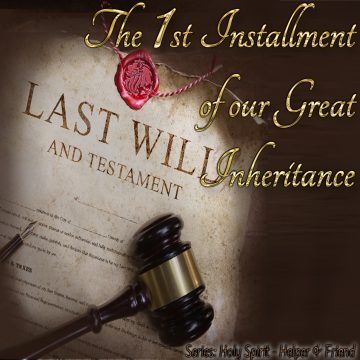 Message – The Spirit – The 1st Installment of our Great Inheritance

The Spirit – The 1st Installment of our Great Inheritance

As we’ve been going through Galatians, the question has been “how did you receive the Spirit?”

If you remember I admitted that this question challenged me, because like we’ve continued to find true over and over – this points to a person – to relationship and not to events, conditions, privileges or promises.

It does not even capitalize on heaven or forgiveness of sins, on prayers being answered or even being heard though it has implications on all of these. No, the question focuses our attention like a laser right where it needs to be – entirely upon a relationship with a person – that of the Holy Spirit.

In this letter to the Galatians Paul speaks of the Spirit as THE promise and asks if He was received into their hearts and lives by “By flesh efforts or by trusting in the truth of the message heard?”

Even THAT is personal and relational and intimate, because the answer is clearly that we received the Spirit of God because we believed the message of the testimony regarding Jesus – given to us by a person who was testifying to Christ BY THE SPIRIT.

The Spirit was indeed prophesied as the promise to be given at the coming of the New Covenant.

Gal. 3:13-14, “(13) Christ redeemed us from the curse of the law by becoming a curse for us (because it is written, “Cursed is everyone who hangs on a tree”) (14) in order that in Christ Jesus the blessing of Abraham would come to the Gentiles, so that we could receive the promise of the Spirit by faith.”

As I was teaching some of the men at Loving Hands this past week it occurred to me that in fact, the Spirit was where THE spotlight was at the inception of the church.

In fact, the salvation experience of the Apostles was specifically referred to as receiving the Spirit.

(19) On the evening of that day, the first day of the week, the disciples had gathered together and locked the doors of the place because they were afraid of the Jewish leaders. Jesus came and stood among them and said to them, “Peace be with you.”

(20) When He had said this, He showed them His hands and His side. Then the disciples rejoiced when they saw the Lord.

(21) So Jesus said to them again, “Peace be with you. Just as the Father has sent me, I also send you.” (22) And after He said this, He breathed on them and said, “Receive the Holy Spirit”

“(7) After there had been much debate, Peter stood up and said to them, “Brothers, you know that some time ago God chose me to preach to the Gentiles so they would hear the message of the gospel and believe. (8) And God, Who knows the heart, has testified to them by giving them the Holy Spirit just as He did to us, (9) and He made no distinction between them and us, cleansing their hearts by faith.”

The Spirit of God is also a manifestation of the peace of God.

In John 14 as Jesus was encouraging His disciples regarding the necessity of His departure, said to them regarding the Spirit He was going to send to them,

“(26) But the Advocate, the Holy Spirit, Whom the Father will send in My name, will teach you everything, and will cause you to remember everything I said to you. (27) “Peace I leave with you; My peace I give to you; I do not give it to you as the world does. Do not let your hearts be distressed or lacking in courage.” – John 14:26-27

This word Peace in these verses means – Peace, meaning health, welfare, prosperity, every kind of good.

Then Jesus remained with them for 40 days teaching them regarding the Kingdom of God, then His parting words were, “(4) While he was with them, he declared, “Do not leave Jerusalem, but wait there for what my Father promised, which you heard about from me. (5) For John baptized with water, but you will be baptized with the Holy Spirit not many days from now.”– Acts 1:4-5

Jesus, when being accused of casting out a demon by the prince of demons replied, “(25) Now when Jesus realized what they were thinking, He said to them, “Every kingdom divided against itself is destroyed, and no town or house divided against itself will stand. (26) So if Satan casts out Satan, he is divided against himself. How then will his kingdom stand? (27) And if I cast out demons by Beelzebul, by whom do your sons cast them out? For this reason they will be your judges. (28) But if I cast out demons by the Spirit of God, then the kingdom of God has already overtaken you.” – Matt. 12:25-28

Listen to that. Jesus is essentially saying, “If I set captives free from the bondage of satan BY THE SPIRIT of God, then God’s Kingdom is here NOW!”

What does that mean or imply?

(38) For if anyone is ashamed of Me and My words in this adulterous and sinful generation, the Son of Man will also be ashamed of him when He comes in the glory of His Father with the holy angels.”

“(1) And he said to them, “I tell you the truth, there are some standing here who will not experience death before they see the kingdom of God come with power.”

“(6) So when they had gathered together, they began to ask Him, “Lord, is this the time when you are restoring the kingdom to Israel?”

(7) He told them, “You are not permitted to know the times or periods that the Father has set by His Own authority. (8) But you will receive power when the Holy Spirit has come upon you, and you will be My witnesses in Jerusalem, and in all Judea and Samaria, and to the farthest parts of the earth.” (9) After He had said this, while they were watching, He was lifted up and a cloud hid Him from their sight.”

We are told by Paul,

“For the kingdom of God is demonstrated not in idle talk but with power.”

He said this while encouraging the arrogant among the church in Corinth to repent lest he have to come to them with a rod of disciple instead of with love and a spirit of gentleness.

So part of the power of the Spirit is for maintaining discipline in the church.

Well with Jesus we are told in Luke 4:18&19, “THE SPIRIT OF THE LORD IS UPON ME, BECAUSE HE HAS ANOINTED ME TO PREACH THE GOSPEL TO THE POOR; HE HAS SENT ME TO HEAL THE BROKENHEARTED, TO PROCLAIM LIBERTY TO THE CAPTIVES AND RECOVERY OF SIGHT TO THE BLIND, TO SET AT LIBERTY THOSE WHO ARE OPPRESSED; to proclaim the year of the Lord’s favor.”
…and Jesus told those who followed Him that even as He had been sent, He was sending them.

The Holy Spirit is SUCH an integral part of our lives in Christ, and His work in us and empowering of us is so pervasive that we can become overly used to Him – so much so that we fail to acknowledge Him and that is a terrible failing on our part.

Rom. 14:17, “for the kingdom of God is not eating and drinking, but righteousness and peace and joy in the Holy Spirit.”